Some day you might want to remove files or directories from git permanently, because someone committed sensitive data or large binary files that should not reside in the repository to keep clone times short.  In this blog I want to show you how to delete directories and files permanently from a git repository.

The first chapter is a short answer and is intended for those of you who only want to quickly remove files and don’t want to undestand it in-depth.

The section chapter dives into the depth of git and gives you links to other resources to understand how files are managed in git and thus can be removed.

If you are interessted in using a graphical user interface… check GitDirStat out.
Toggle

For those of you who are interessted in the fast way I will show you the git commands you need in order to remove directories and files or more general “paths” from a git repository. Therefore each step will only give a short explanation of what is done.

The steps described below only work with a non-bare repository.
Toggle

If you save the bash script in a file called git_delete_paths.sh you can use the script like this

Rewriting the history of a large repository might take a long time. Even if the faster –index-filter options is used. While I tried a lot of performance improvements I want to list my experiences here and hope it will help you.

git filter-branch on windows vs. linux

I could figured out that a git filter-branch is much slower on windows than on linux systems. So if you have the choice you should do it on a linux system. Also a virtual linux machine was much faster than doing the same in the windows git bash.

Since git filter-branch is used to rewrite the history it does a lot of IO operations. Therefore you can dramatically increase the throughput by using a ramfs.

On my ubuntu system I created a ramfs using:

In my case I created a ramfs or tmpfs with a size of 4 GB. Choose an appropriated size for your case. The tmpfs must be large enough to hold your git repository clone. Also make sure that you do not exceed your systems free memory.

After that clone your repository (or just copy it) into the /mnt/ramfs directory and do the filter branch there.

This section takes a closer look at the way that git manages files and the removal process. You should read this section if you want to know what the git commands shown above really do.

How files are managed in git

All data in git is stored in objects. Each object has a specific type  that specifies which kind of data it contains and there are different types of objects.

The main types for storing files are:

The following figure shows a conceptual model of how directories and files are represented by git objects. 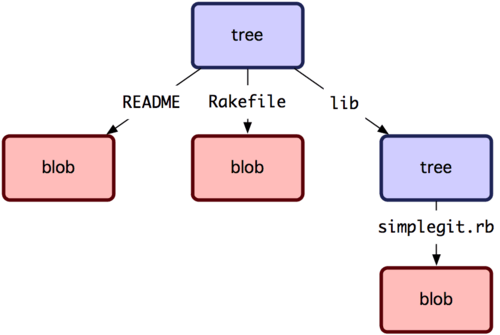 Git objects are stored in the repository under the objects directory. For more details take a look at Git-Internals-Git-Objects.

I said before that all data in git is stored in objects. Thus each commit itself is an object of type commit and a commit points to a tree object. So if we rewrite the commit’s tree pointer we rewrite the complete tree that is connected to that commit.

So now it gets more and more clear what we have to do if we want to remove a file or directory from all commits in git. We must rewrite the tree objects that a commit references or even remove tree objects completely fr0m a commit.

This section will review the commands that the first chapter shows and take a deeper look at their arguments in order to understand how the removal process works.

1. Find the Snapshot which introduced some path

Find the Snapshot which introduced some path
Shell

The git log command is used to query commits. You can specify a path at the end of the command that is separated by —. If you do that the git log only prints out commits which affect that path in some way. With the –reverse argument we define that we want the commits in reverse order. Thus the first commit ever made that affects the given path is the first one that git log prints out. Since we are only interressted in that commit we use head -n1 1 to only print the first line of the git log command, because this line contains the snapshot’s hash.

2. Find the Snapshot in which the path was removed

Find the Snapshot in which the path was removed
Shell

In this example we use the -1 to tell git that we only want to get 1 commit and this commit will be the last commit that affects the path. Since we are only interressted in that commit we use head -n1 1 to only print the first line of the git log command, because this line contains the snapshot’s hash.

3. Remove all paths from the repository and rewrite the commits

Remove all paths from the repository and rewrite the commits
Shell

The git filter-branch command is used to loop over a selection of commits and execute some other command on each commit. In our case the filter-branch command uses the –index-filter argument which increases the performance, because –index-filter means that each commit will not be checked out. Instead only the index or staging are will be reconstituted. But this come at a price. The trade-off is that you can only use git commands in the command argument. If you want to use every command that is available at the command-line you can use –tree-filter instead. But a –tree-filter does a complete checkout of each commit and therefore is not as performant as the  –index-filter.

Since we use the  –index-filter we must use git’s rm command to delete files and folders. The  –index-filter only works on the index and therefore we must add –cached to the rm command. Finally we also add  –ignore-unmatch so that the command returns successfully even if no files are removed.

To allow rewrite of tags that might be affected by the path removal we add –tag-name-filter cat which updates the tags.

One of the most important parts of the command is the part where you define the history range to filter. In the example above it is 8727af97714eded773da4b3b1c38ba4bfd73b0a6^1..2e746b23f09a006a3381292dc264ada4ba5e9ff8. The very important part is the ^1 at the end of the first snapshot. The from-part of the range is interpreted as exclusive. So the filter-branch will normally start at the next snapshot. Therefore we use ^1 which is a shortcut for the direct parent of the current snapshot. If you forget the ^1 you will not be able to delete the fieles, because snapshot 8727af97714eded773da4b3b1c38ba4bfd73b0a6 will not be processed and therefore hold references to the objects and git gc can’t clean the references than.

The git for-each-ref command loops through git references and you can output the references in a format that you want. Since we executed git filter-branch and removed filtes git makes a backup of the original refs in refs/original. So these refs still reference the files we want to remove. Thus we need to remove the backup references in order to make the files eligible for garbage collection. So we have to read every ref and delete it using git update-ref -d $ref.

5. Remove refs from the reflog

Remove refs from the reflog
Shell

The git reflog a mechanism that records reference updates. It is very helpful if you accidentally remove some reference. In our case it is not helpful since we want to remove files permanently and therefore must remove all references to them in order to make the files eligible for garbage collection. Therefore we clear the reflog completely with the arguments expire –expire=now –all.

After we removed all references to the files we want to delete we execute gc –prune=now which runs git’s garbage collector. The garbage collector identifies all objects (tree, blob, …) that are not references by a commit anymore and deletes them. Normally git gc has a grace period of 2 weeks. We don’t want to wait 2 weeks until the objects get deleted so we tell git gc that it should prune the objects now.